Solar Learning Center > Solar Panels for Home > How Does Solar Power Work on a House? Your Questions Answered > How are solar panels manufactured?

You know solar panels as the futuristic-looking black or blue rectangles that soak up sunlight and bring down your energy bills. You might even get the technology behind how they work. But how are solar panels actually made? What are the stages to produce these modern marvels in clean energy?

We’ll look at the manufacturing process for most common panels, photovoltaic or PV. Photovoltaic cells make electricity from sunlight. Basically, they do this by enabling light particles from the sun to knock electrons from atoms in the PV cells. Here’s how a solar panel is put together to do just that on your rooftop day after day.

The most common material to create PV cells with is silicon crystals. Some of the development processes depend on individual manufacturers and specifically what kind of panels they make. There are a single layer or multiple layer panels, for example. But here are the basics.

The first step in making a solar panel is to mine and purify silicon. Purification is usually done with an electric furnace. Thankfully, silicon is a highly abundant resource. In fact, it’s the second most abundant element (right behind oxygen) on the planet. It’s mined around the world, but in the U.S., it’s found primarily in the Midwest and the South.

Pure silicon cylinders, known as “ingots” are then sliced into paper-thin disks or wafers. These are then further trimmed into rectangles or hexagons. This is so they can fit together perfectly within the frame of a solar module and maximize the area.

By treating the polysilicon with boron and phosphorus, a positive and negative charge is created. This P/N junction is where the electricity happens. Wires connect the tiny electricity semiconductors with metal to creates paths for the electricity.

The cells are coated with an anti-reflective substance so they don’t simply reflect sunlight back but capture it. Then they’re sealed into an acetate, often made of rubber or vinyl. The panel is placed into an aluminum frame and sealed beneath a sheet of glass or plastic to create the much-anticipated solar panel. 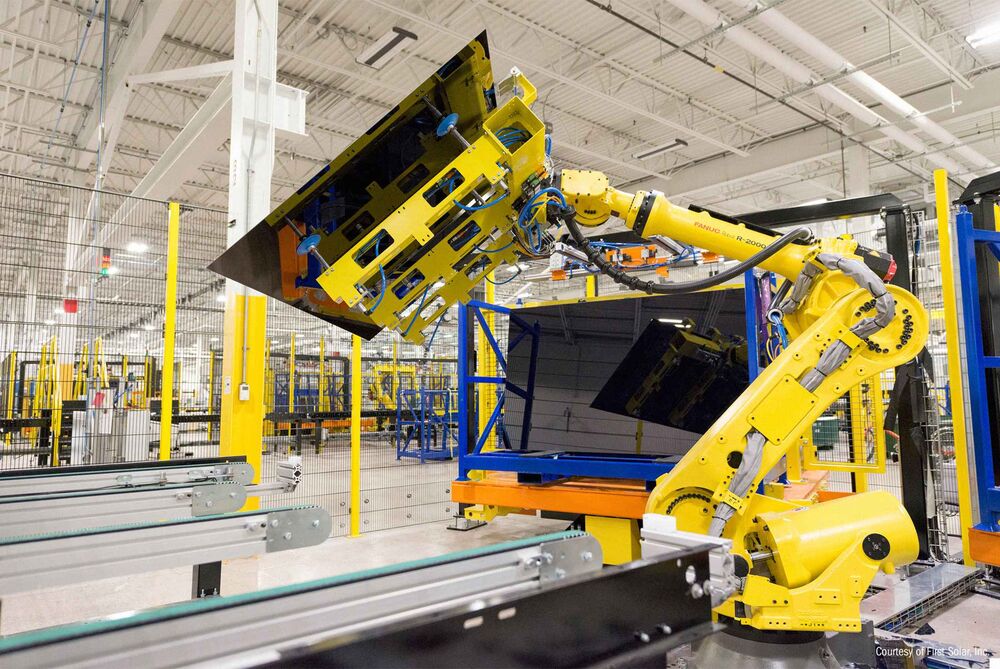 Much of the work for solar panels is done by precision-level robotics. These robot workers are part of the reason solar prices are becoming more competitive. Some aspects are fully automated, but some are still run by technicians.

As a whole, the solar industry (from manufacturing all the way through sales and installation) employed more than 250,271 Americans in 2017.

Also, check out this video to find out the difference between mono and polycrystalline solar panels.