Solar Learning Center > The Pros and Cons of Solar Energy in 2023 > How Do Solar Panels Lower Your Electric Bill?

We need electricity for everything from air conditioning and kitchen appliances to TVs and cell phones, and all of that usage adds up. But did you know you can use solar panels to lower your electric bill?

In this article, we’ll explore how to use solar panels to lower your utility bill and give you the tools to start saving.

How to Lower Your Electric Bill With Solar Panels

We’ll go over each problem, and show how solar is a solution to fix it and lower your electric bill.

It may not feel like it, but your probably paying way more for grid energy than you would be for solar.

The price of electricity is measured in cents per kilowatt-hour (kWh). According to the US Bureau of Labor Statistics, the national average price for electricity in July 2022 was $0.166 per kWh.

Seattle had the lowest price of any major metro area at $0.118 per kWh while San Diego, Houston, Urban Hawaii, and San Francisco all had electricity rates above $0.311 per kWh.

Factoring in discounts and the 30% federal solar tax credit, the average price of solar purchased through solar.com is between $0.06 and $0.08 per kWh.

Let’s see how the price of grid power in major US metros compares to the price for solar through solar.com. (We’ll even use the higher-end of the solar.com range to be conservative.)

Price of grid vs solar electricity in major US metros

Solar panels can not only lower your electric bill — they can completely replace it.

If you’re stuck on grid power, there’s almost nothing you can do to lower your rate. So your left with trying to lower your usage by putting a lock on the thermostat and using a binoculars to watch Netflix through your neighbor’s window.

But by using solar panels, you can lower your electric bill by slashing the rate to around 8 cents per kWh — far lower than the price per kWh in any major US metro.

Think of going solar as replacing your electricity bill with monthly payments for your solar equipment. Here’s how that looks over 20 years of paying 8 cents/kWh for a cash solar purchase versus the national average 16.6 cents/kWh for grid energy. 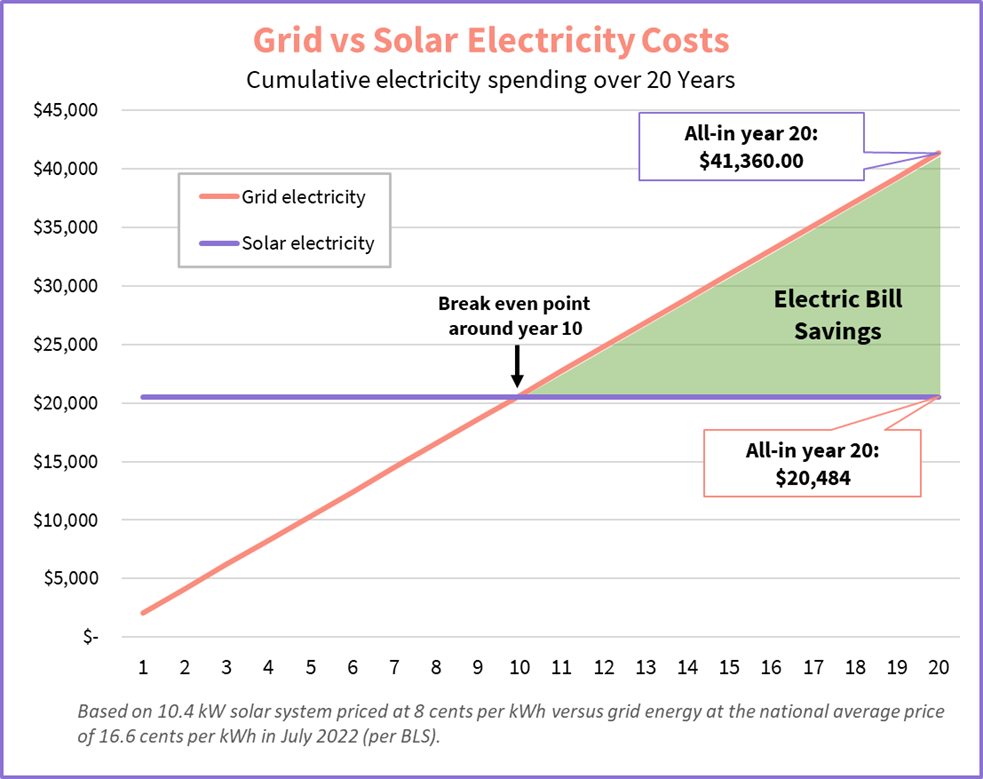 All-in, using solar panels lowered the cumulative electricity bill by $20,876 over 20 years. And the overall savings could be more than that for three reasons:

Use our solar savings calculator to see how much you can save.

Grid electricity rates are already higher than solar, and they will continue to increase over time. By taking these rate hikes into account, solar panels can lower your electric bill even further.

Meanwhile, going solar fixes your electricity costs for the lifetime of the system. So if go solar in 2023 at 8 cents per kWh, you’ll still essentially be paying 8 cents per kWh in 2043 when grid energy is over cents per kWh (based on 2.79% increase per year — it could be more!).

Here’s how paying for solar versus grid electricity looks over 20 years when accounting for 2.79% rate hikes based on the historical average and 5% rate hikes that are more in line the average rate of inflation. 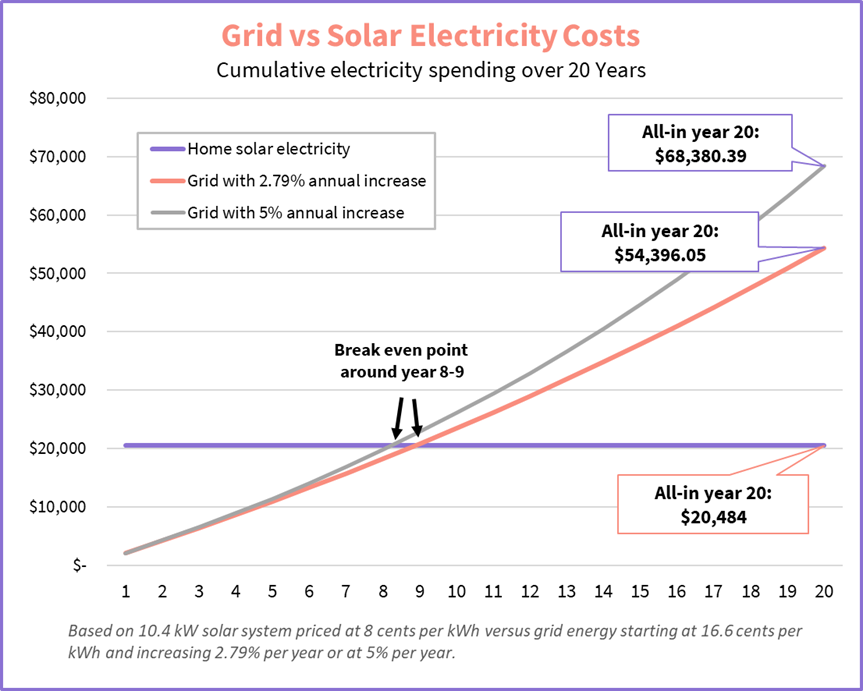 Taking rate hikes into consideration, solar owners would save:

How much will the price of grid electricity go up over the next 20 years? Nobody knows, but it’s clear that solar is the cheaper bet over the long haul.

Why do utilities hike electricity rates?

Even as utilities add cleaner, cheaper renewable energy into the electric grid, they face enormous costs to maintain and expand the grid.

Since the US was one of the first countries to build out an electric grid, it also means that our system is one of the oldest. Utility companies spend hundreds of millions of dollars every year upgrading their towers, lines, substations, and transformers. These costs continue to drive up the cost of delivering electricity, even as cheaper generation sources come online.

Take a look at this graph of year-over-year electricity price changes since 2019 from MishTalk. 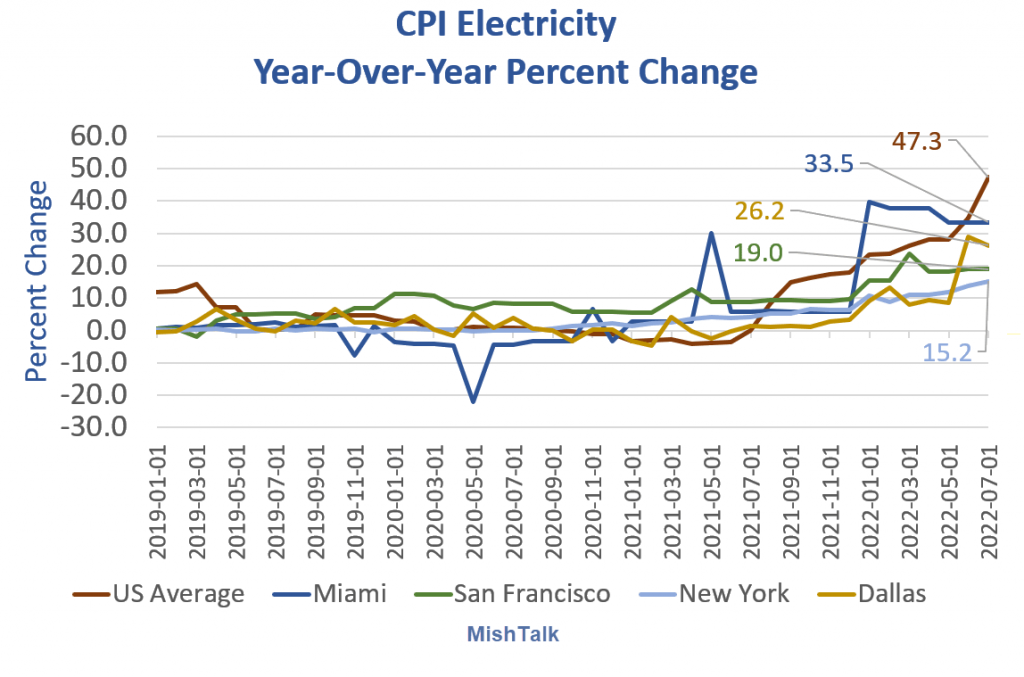 See a pattern? We don’t either. It’s madness.

Few people, if any, saw that coming.

Skip the guessing game with solar

Many homeowners are able to cover 100% of their energy needs with their solar system, in which case they will typically only have a $10-20 minimum service charge from the utility that goes towards grid maintenance fees, charges for net metering, and other associated costs.

If the solar system doesn’t cover 100% of their needs, then they will have some level of remaining electric bill that will vary through the year.

With a cash purchase, there’s no recurring cost for the system or power. With financing, there’s a set monthly payment that doesn’t vary based on season or immediate usage. Either way, this stability can be very valuable for homeowners budgeting their monthly expenses. 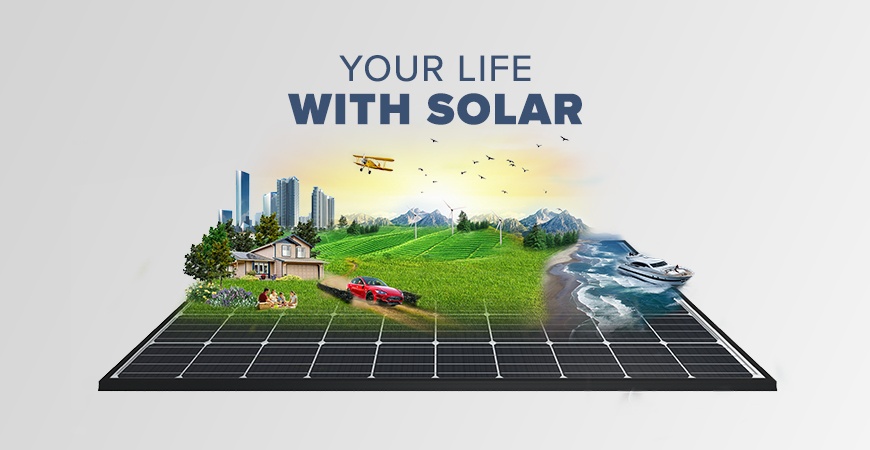 To recap, solar panels do two things to reduce your electric bill:

In addition, solar panels also increase your home value, reduce your carbon emissions, and bring stability to your electricity costs.

Get multiple solar quotes for your home. Start here.

6 Reasons You Should Buy Solar Panels

There is a lot of buzz around home solar these days. There are a lot of messages pushed to homeowners about their options. I’d like...

Top Reasons Why You Should Go Solar Before 2022

Have you been wondering whether you should take the leap over to solar before 2022? Some reasons for doing so are obvious, such as cleaning...

America’s revolutionary solar advocate succinctly summarized the reasons why you should go solar. I’d put my money on the sun and solar energy. What a...

The Impact of SCE’s Rate Changes

Here's How to Understand Your PG&E Bill After Going Solar

For residents of California who are customers of the Pacific Gas & Electric (PG&E) company, one of your biggest questions before you decide to switch...

Your Electric Bill After Going Solar

After going solar, the first thing you will likely notice is the drastic decrease in your monthly electric bill. The significant savings on one’s...

It is no secret that the cost of electricity has been going up recently and is set to increase further in the future. All throughout...

It’s common knowledge that the cost of solar panels and other solar related technologies has dropped significantly over the past decade and will continue to...

Your Life Once You Go Solar

If you landed on this post, then you probably have some interest in going solar. Maybe you have already installed a solar panel system and...

The Top 10 Benefits of Switching to Solar

For most people, making the decision to go solar brings up many questions. Even just thinking about switching to solar energy can sound strenuous. However,...

10 Tips To Lower Your Electric Bill

At Solar.com, our team is always looking out for ways to save you money on your electric bill. Here are 10 tips to help you...

The Nevada Power and Utilities Commission recently weighed in on the state’s net metering debate with bad news for solar customers and the solar industry...

With scorching temperatures and nearly year-round sunshine, Arizona seems to be an ideal location to implement a rooftop PV system. However, with the possibility of...

In 2014, 369.6 GW of energy was generated from wind power globally. This number continues to grow every year, and it shows no signs...

Solar.com was recently featured on KTLA’s Money Smart. Check it out to learn about going solar in California! The average cost of utilities for homeowners...