Solar Learning Center > Solar Panels for Home > How Does Solar Power Work on a House? Your Questions Answered > How Solar Panels Absorb and Store Energy

The sun’s energy is expressed in different ways, depending on what materials it interacts with.

Solar panels are built with materials that physically interact with certain wavelengths of solar energy. This enables them to transform solar energy into electricity. Here’s how solar panels absorb and store energy.

What’s in a solar panel?

Traditional solar panels are made with silicon crystals. Silicon is a very special material. It creates an electrical current with sunlight. This is because of the electrons making up a silicon atom.

When sunlight hits your skin, the electrons in the atoms of your body vibrate quickly to generate heat. But electrons do something different in silicon. The electrons start moving around. This means that the sun’s energy is conducted into an electrical current, rather than static heat.

Newer, thin film solar panels function in a similar way. Rather than silicon, they’re made with

Crystals made from these are smaller and less expensive to produce. Though, they’re not quite as good at producing electricity as silicon. Thin film solar panels are used more for commercial projects, on satellites and spacecraft. 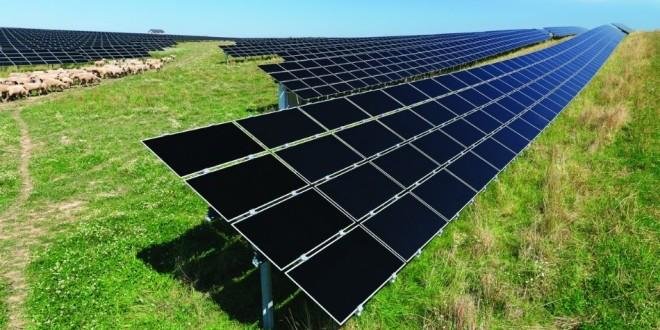 With either the silicon or thin film solar cells absorbing the sun’s light, the electrons do their thing. They’re bumped up to a higher level of energy and get active. Once that higher energy level is reached, it’s up to us to capture and direct the electricity where we can use it.

A series of tiny wires creates a network of electrical current-conducting “mini highways” within a solar panel. These all tie back to a power inverter. Inverters change the raw electric current from DC power to AC power. Your home is wired to conduct AC power, so inverters essentially make the electricity usable.

In short, no they don’t. This has been one of the biggest challenges for solar developers. While it’s great to generate clean electricity, days with less sun and lower production might mean you have to tap into the power grid anyway. But there are options.

Many states offer net metering, which allows you to sell any excess energy you produce on sunny days to the utility company for credit. Then when those rainy days come along (or at night), you can pull power from the grid with those points you racked up.

Battery storage is another option for storing solar energy. Companies such as Tesla, LG, and sonnenBatterie are producing batteries that make solar plus storage for homeowners more available. Batteries give the option of more independence from the grid. You can pull energy from your battery at night, rather than switching to utility power when the sun stops shining.

Battery backup also comes in handy in cases of power blackouts. You could run your appliances and electronics using a solar battery for a day or two. That’s generally enough time for your utility to get things up and running again. Of course, your solar panels will kick back in when it’s sunny as well, giving your battery a break.

Learn more about using a solar battery backup during a power outage here. Explore more about how solar might fit your home by punching in your address here.