Apple’s brand new headquarters is quickly approaching completion. The 175-acre campus is costing the tech giant an estimated $5 billion and will house roughly 12,000 employees once fully operational. The main building, what many have dubbed the “spaceship,” is an incredible 2.8 million square feet.

What piqued our interest into this mega-project was the drone footage that revealed solar panels covering almost every inch of every roof on the buildings. Even the 10,000-car parking structures are completely covered by panels (which appear to be bi-facial!).

The prominence of solar on this project reflects a larger strategy of renewable energy proliferation in the tech sphere. Solar.com has profiled Apple’s other tech giant brethren and their clean energy adoption projects, like Amazon installing solar on all of their distribution centers. 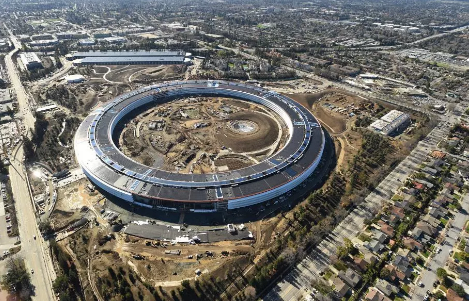 Apple has already proclaimed that 100% of its data centers and 96% of its other facilities run on renewable energy.

According to Renewable Energy World, the campus will run entirely on renewable energy. It will generate 17 megawatts (MW) of solar on rooftops and also be supplemented by 4 megawatts of Bloom Energy fuel cells. They’re hoping that this onsite generation will cover around 75% of power requirements during working hours. The remaining energy needed will be supplied by a 130-megawatt off-site solar farm in Monterey County.

If the Apple Campus 2 headquarters indeed produce 17MW of solar, that would blow every other commercial system in the United States out of the water.

As a comparison, Google’s headquarters, GooglePlex, is only 1.6MW. The largest installed commercial-scale system today is only 4.26MW in Edison New Jersey. Apple’s 17MW of solar would be the equivalent amount of power needed to supply roughly 2,400 homes, assuming an average home solar system size of 7kW.

I asked one of our PV designers at Solar.com, Matt Collins, to run a cursory solar analysis of the main campus features that appear to have solar — the spaceship building and two parking structures — and estimate the amount of solar that could fit on these rooftops.

Matt assumed optimal weather conditions and premium panels for higher wattage. Since the release of this post, we’ve confirmed our panel assumptions were correct: The panels are all made by SunPower Corporation, a developer known for one of the best quality and highest wattage panels on the market.

From Matt’s analysis, he determined that the parking structures would each produce approximately 4.5MW or 9MW total. He then calculated that each of the nine sections of the spaceship building could generate around 1MW, adding up to 9MW for the entire building.

This preliminary analysis suggests that the 17MW system size reported by Apple is indeed accurate, and may even be higher! This analysis doesn’t even take other buildings into account that may later install solar, like the large ones in the research and development section of campus.

Your Own Personal Tour of the Apple Solar Campus

We’re very excited to see such inspiring, global companies like Apple “walk the walk” when it comes to renewable energy deployment. Apple’s Campus 2 will be the flagship for one of the world’s most prestigious brands, and the prominence of solar on it sends a strong message for the future of energy.