Are Solar Panels Worth It? Weighing the Costs and Benefits of Solar | Solar.com
Close Search

Solar Learning Center > Solar Panel Cost > How Much Do Solar Panels Save? > Are Solar Panels Worth It? Weighing the Costs and Benefits of Solar

Are Solar Panels Worth It? Weighing the Costs and Benefits of Solar

Are solar panels worth it?

Over the past decade, solar panels have risen in popularity at an increasing rate. Odds are, if you drive through any suburb, you’d see at least a few houses with solar panels on their roof. That leads many homeowners to wonder — are solar panels worth it?

Aside from the environmental benefits, solar owners benefit financially, too. In previous decades, solar panels weren’t nearly as cost effective to install as they are today. Due to technological advancements, increased competition, and healthy incentives, solar owners can save hundreds of thousands in energy costs over the life of their system.

Today, installing solar panels is considered a long-term investment with strong rates of return — much like buying a house.

There are three main reasons why solar panels are worth it:

Depending on the location of the home, homeowners can save high sums of money in the long term.

For people deciding if it’s worth installing solar panels on their home, it’s important to weigh out the total return on investment (ROI). This might seem obvious, but calculating the ROI of solar panels isn’t always as simple as it seems. Every person’s situation is slightly different, and predicting the 10-year benefit of your roof’s solar panels can be quite difficult without any guidance.

In this article, we’ll explain how to weigh the costs, benefits, and overall ROI of installing solar panels on your home.

Weighing the costs of going solar

Just as with any investment, it’s important to calculate the initial costs when considering if solar panels are worth it.

The next step would be to determine exactly what kind of solar system you want to purchase. These solar systems range anywhere from 5 kW (average) to 15 kW and above depending on your electricity usage and sun exposure.

The cost of going solar varies from home to home. The only way to get an exact figure is to get multiple bids from vetted installers.

Enter your zip code above or call (800) 337-6527 get multiple quotes through the solar.com marketplace.

Weighing the benefits of going solar

After installing solar panels, there are two main kinds of benefits: financial benefits and practical benefits.

Simply put, going solar replaces the ever-rising cost of grid electricity with a flat monthly payment on your solar equipment.

One way to measure the financial benefit of solar panel installation is to analyze what you’re currently paying for electricity per year. Dig up electricity bills from the past 12 months, add up what you’ve spent over the year, and consider this your “money saved” by installing solar panels.

For example, if you paid $2,000 per year, you would deduct that number by the overall costs incurred for going solar. If the net cost of going solar is $10,000 (after rebates and tax credits), then the solar panels would pay for themselves in roughly 5 years. But because utility electricity rates consistently rise each year, this payback period may be shorter.

This is called the “break-even point” — or the point solar panels become worth it financially.

Solar panels are typically under warranty for 25 years (but often last much longer). If your break-even point is reached within 5 years and you expect to save at least $2,000 a year for electricity, then you benefit from around 20 years of no electricity bills and save at least $40,000… and that’s before factoring in your added home value or rising grid electricity prices.

Another way to find your break-even point is to compare the price of grid electricity versus the price of paying for your solar panels over 20 years.

As we mentioned above, the average cost of grid electricity is 16.7 cents per kWh in the US and rising at 2.79% per year.

The chart below shows cumulative cost of grid versus solar electricity over 20 years, and a break even point around Year 8. After 20 years, the solar customer has saved nearly $34,000 and still has plenty of life on their panels! 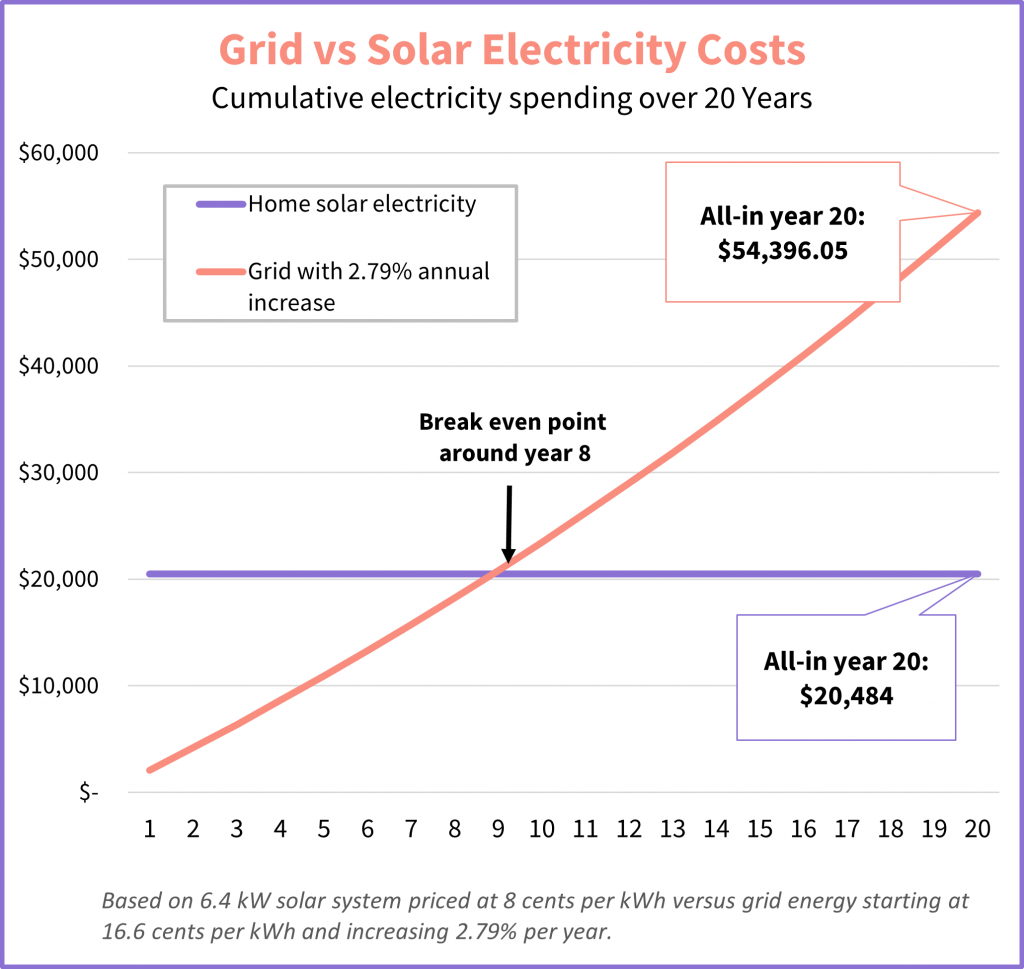 Aside from only financial benefits, there are also more ambiguous, qualitative benefits that homeowners would benefit from in the long term. Some of these benefits, although difficult to measure, potentially include:

Measuring the ROI of installing solar panels in your home doesn’t have to be cryptic and confusing. It’s actually quite simple. If you keep in mind that investments like these take a little bit of time to come to fruition, it becomes a lot easier to go solar (not to mention the intangible benefits). Even if you don’t feel that you’ll benefit much from going solar today, if you plan to pass down your house to your children, other family members, or even sell it to a stranger, you’ll benefit financially in the long-run.

Enter your zip code above to see how much you can save with solar!

How Much Can I Save by Switching to Solar in 2021?

As solar goes mainstream and the price continues to drop, there is a good chance that you have already thought about switching to solar. There...

At a glance: Suniva, a U.S. based solar panel manufacturer, filed a product dumping complaint with the International Trade Commission in April 2017. Suniva has...

What Is Net Energy Metering?

One of the most frequently asked questions for solar homeowners is what net energy metering (NEM) is and how it works. NEM is a credit...