Once just a fantasy, the last 5 years have seen the Dutch create a solar bike path and the French pave a solar road. Now China, which has the biggest solar market in the world, is rolling out its own solar freeway.

China’s energy landscape is mixed. The country produces more carbon dioxide and consumes more coal than any other nation. However, like India, China is aggressively pursuing clean energy.

In fact, China is the world’s largest producer of solar energy. Some citizens have pushed the government to address the pollution problem that drastically affects their quality of life. The Chinese government also recognizes clean energy as a necessary component of meeting their growing population increasing demand for electricity.

There is also great economic promise in the clean energy industry – beyond the potential for cheap electricity. Getting a head start in renewable energy technology could eventually allow China to dominate the industry.

Solar roads are a more recent addition to China’s deep dive into clean energy. The country’s first solar road is located in Jinan, the capital of Shandong, and runs for six-tenths of a mile. The road covers 63,200 square feet with three layers, including a top clear concrete layer, a middle solar panel, and a bottom layer of insulation. The road will generate an estimated 1 million kWh of electricity annually

The idea of a solar roadway has captured the imagination of many, though some believe it’s better left imagined than implemented. A few months ago, Slate published a piece titled “What Is the Point of a Solar Road?” The article noted the high cost, low efficiency, and potential for unsafe road conditions that can accompany solar roads. However, none of the aforementioned roadblocks proved to be major roadblocks in China’s pursuit of a solar freeway.

While prices have decreased recently, solar roads do have a greater upfront cost than traditional roads. However, the project designers hope that solar roads’ durability will make repaving projects – which are traditionally required every couple of years – unnecessary. Lights in the top panel can be changed to indicate different driving signs and electric heating strips can melt snow.

Solar roads are less efficient than optimally positioned panels, with only about half of traditional output due to cars blocking out sunlight. However, there is abundant road space available and solar roads are merely one facet of the country’s multidimensional clean energy plan.

Solar Roadways in the United States?

While China, France, and the Netherlands have led the way, the United States is not far behind. The American company Solar Roadways has already completed two funding contracts with the U.S. Department of Transportation after getting its start through crowdfunding. 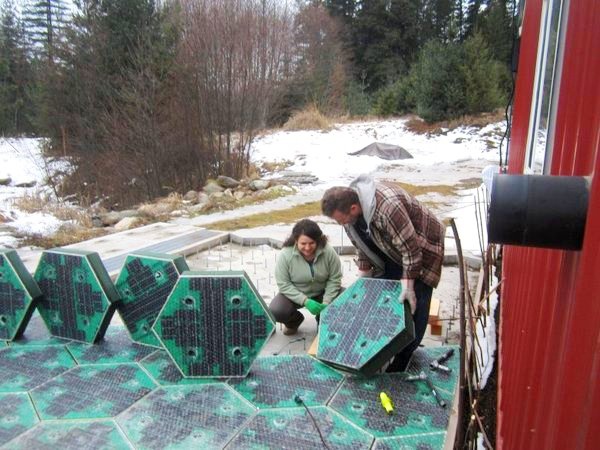 In 2016, Solar Roadways collaborated with the state of Missouri to install hexagonal solar panels on the state’s welcome center walkway. The State said they would consider transforming part of Route 66 into a solar roadway. According to Missouri DOT assistant district engineer Tom Blair, “If their version of the future is realistic, if we can make that happen, then roadways can begin paying for themselves.”