What Does the Future Look Like For Renewables? | Solar.com
Close Search

Solar Learning Center > The Pros and Cons of Solar Energy in 2023 > How Solar Energy Benefits the Environment > What Does the Future Look Like For Renewables?

The future of energy is a highly debated subject. One thing hard to deny is the inevitable demise of fossil fuels. Political, economic and social forces are all at the forefront of the energy revolution.

The future of energy is a highly debated subject. One thing hard to deny is the inevitable demise of fossil fuels. Political, economic and social forces are all at the forefront of the energy revolution. Economically, as the cost of renewables continues to decrease – and as the cost to extract non-renewables increases – consumers will turn to renewable alternatives. Politically, energy independence is not only a matter of national security, but integral to economic security as well.

The US government has a vested interest in renewables as the means to achieve energy independence become more available everyday. Socially, as the effects of climate change become more apparent, people are embracing a civic duty of protecting our earth and their health. Despite pushback from coal lobbies, tariffs, and the President’s own views, the renewable energy revolution is upon us.

The Decline of Coal

Coal is currently a major player in the energy sector, but not for long. In its annual report, the Institute for Energy Economics and Financial Analysis (IEEFA) found that coal production will decline by as much as 40 million tons this year. Coal consumption is already down 28% in the US over the past decade, declining to 738 million tons in 2015 from 1.02 billion tons in 2005. 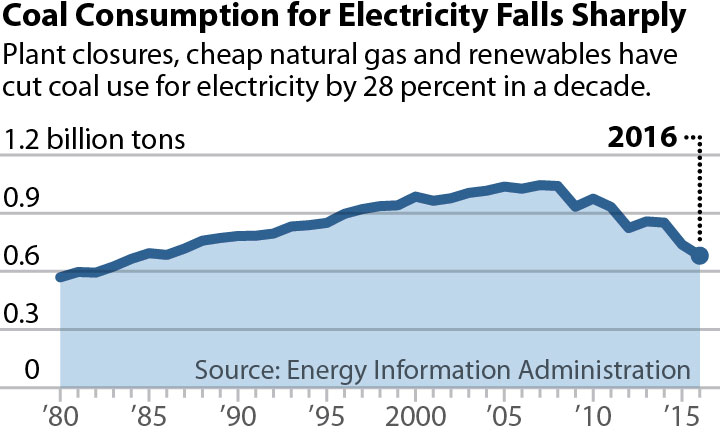 Since 2006, coal production has declined at a steep rate of 42 million tons per year. In 2016, coal saw the largest drop in production in recent history – 150 million tons. Looking forward, the IEEFA predicts two scenarios for 2017: “One will result in flat production.

The other sees a decline in production. These two scenarios are shaped by three factors: natural gas prices, coal exports to Europe, and electricity demand in the US.” Interestingly, as the cost for natural gas drops, the adoption of solar increases (more on this below).

The US isn’t the only region with decreased coal extraction. In January, China’s National Energy Administration announced the cancellation of 103 planned coal plants, many of which were already under construction. The decision effectively eliminated 120 gigawatts of future coal produced power.

In May, India canceled 13.7 gigawatts of planned coal-produced power. It’s not that China and India are expecting to use less energy, but rather that the two nations intend to source their energy from more renewable forces.

In the US, and around the globe, renewable energy has been growing at an impressive pace. For the third year in a row in the US, solar and wind comprised the lion share of new energy capacity additions – ⅔ of all energy capacity. Prices for renewables in certain states only continue to decline as more homeowners install panels, and more solar and wind farms are built.

Yet, despite the overwhelming data in support of a renewable energy future, there has been concern over the viability of solar in the US, especially amidst recent tariff requests and the Trump administration’s disposition toward fossil fuels. Again, it is hard to deny the downfall of fossil fuel dependence.

The question is not if coal and gas will phase out but when. We recently wrote an article describing what would happen to solar prices in the US if the tariffs are approved, and the answer is that – at least for consumers – price increases wouldn’t be totally uneconomical, but the best time to maximize savings is before the trade decision on September 22nd. Regardless of short term hurdles, the future of energy is still looking highly renewable and solar.

In fact, we have considered new information from the policy and technology firm Energy Innovation that sheds light on what the state of energy might look like in 2050. Energy Innovation used the Energy Policy Simulator (EPS) to forecast wind and solar capacity additions to 2050 under three scenarios: a business-as-usual (BAU) scenario, a low natural gas price scenario, and a solar import tariff scenario.

For reference, the EPS models the US as a national power grid considers barriers to renewable deployment due to limited grid flexibility and includes market factored price decreases informed by the cumulative capacity of solar and wind. 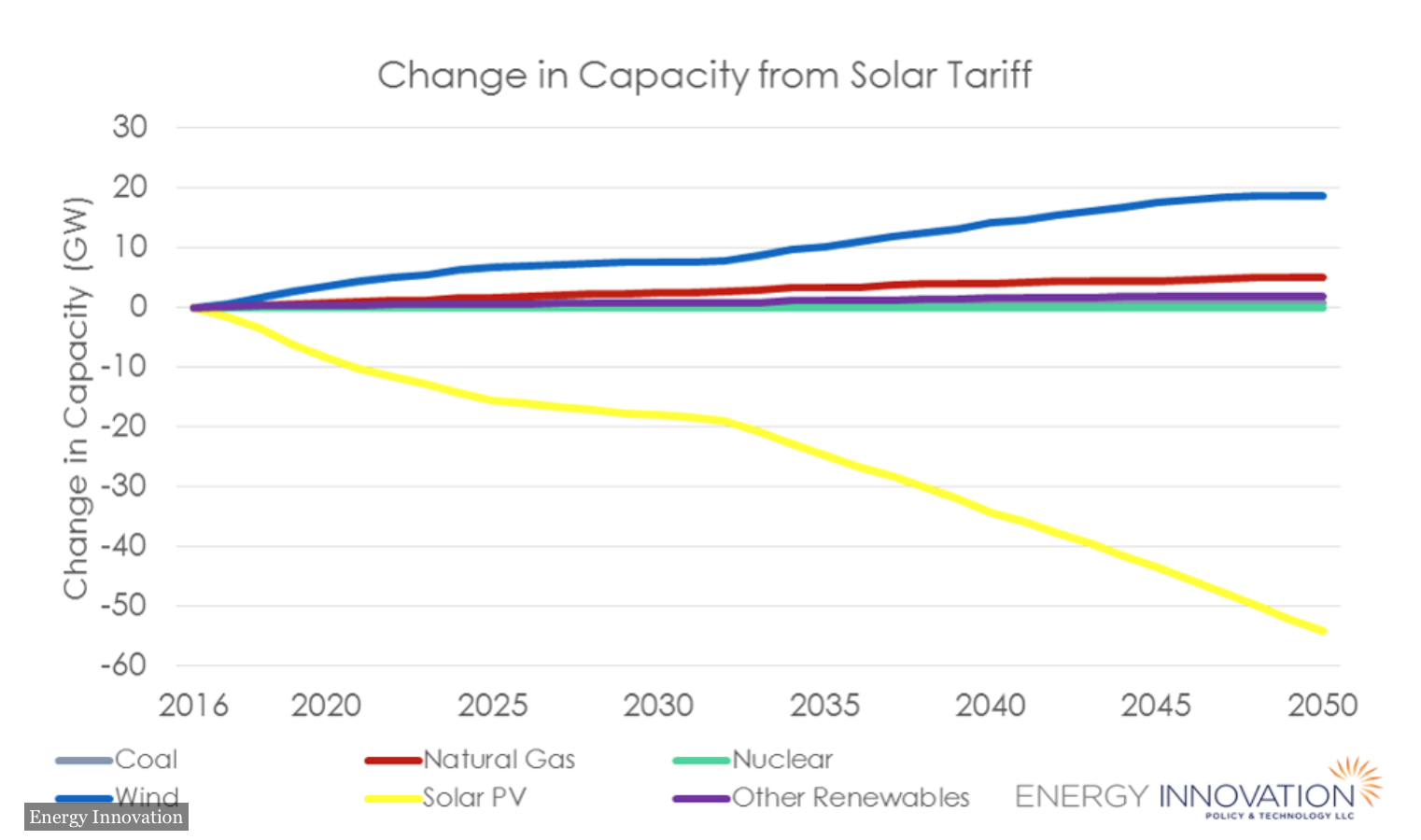 In the solar import tariff scenario, the researchers make the assumption that all US solar panel prices are raised by $0.40/watt (the rate requested by Suniva and SolarWorld). Under those conditions, the solar tariff significantly reduces US solar PV capacity by 54 GW relative to the standard, non-tariff scenario in 2050. As solar becomes more expensive, wind serves as a substitute and increases in capacity by 19 GW, and natural gas capacity gets a small increase of 5 GW.

However, the important thing to understand is that coal only increases marginally – showing that making individual renewable sources more expensive does not correlate to saving coal or dirty fuel. In fact, it only encourages energy consumers to utilize substitutes such as wind, nuclear, and natural gas. In essence, newer, cleaner technologies expand under any scenario because they are still cheaper.

As a timely example, the EPS found that low natural gas prices actually increase new long-term solar and wind capacity by encouraging the retirement of uneconomic coal power plants, and thus increasing the usage of renewables throughout the grid. In terms of numbers, by 2050, continued low gas prices could induce an additional 58 GW of solar PV and 47 GW of wind. See graph below. 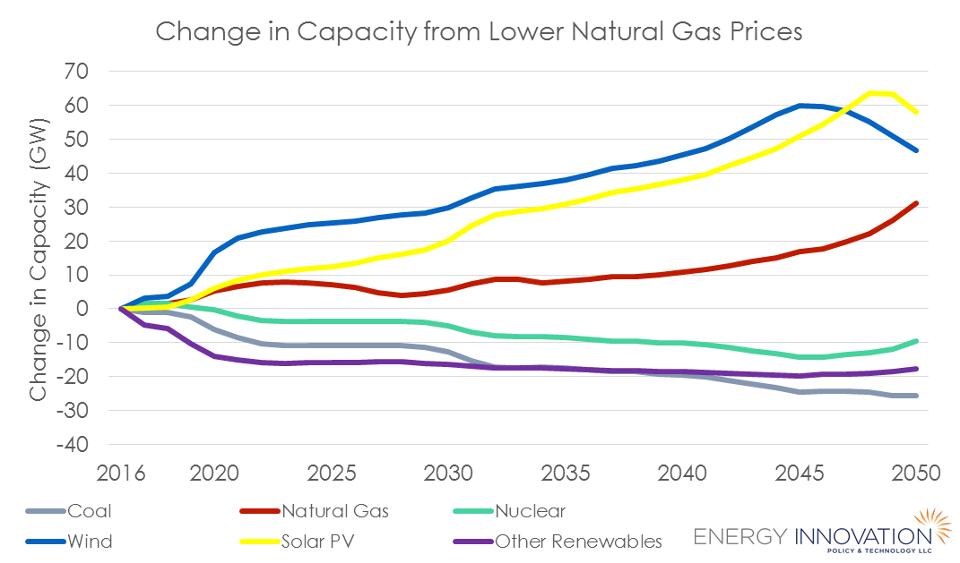 It is generally accepted by scientists that renewables have the capacity to supply the globe with electricity sometime in the near future. Energy policy, determined by politicians, remains a contested subject. The technology is there and the costs are attractive. Furthermore, the renewable energy sector is notably resilient against unfavorable market conditions. Yet, strong clean energy policy is the only thing holding renewables back.

The major policy decisions may not happen today, but small measures such as setting renewable energy targets across states is an auspicious start. Eventually, clean energy with garner national bipartisan support as sourcing energy becomes an increasingly imminent matter of national security and economic viability. 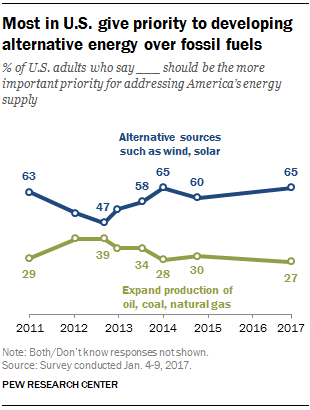