Kathy Hannun, Dandelion’s CEO, was a product manager at X looking for technological solutions to climate change in hopes of drastically improving the future of the planet. Geothermal potential stood out to her.

She and a fellow Googler and software developer Bob Wyman wondered if it was possible for geothermal pumps to follow the same market path of solar. Could they develop an affordable heating and cooling system for homeowners? As things stood, there wasn’t much innovation in the field in general, and the cost was hugely prohibitive.

Solving For Geothermal with Optimism and Healthy Skepticism

Kathy received funding and developed a standardized approach to home geothermal, including innovations in hardware, software, and processes. These innovations made geothermal more affordable and intelligent than any other home HVAC system to date. Check their online portal to see if your home is a good fit.

Most geothermal heating and cooling systems can’t do what Dandelion Air can do. All geothermal systems have underground loop pipes and a heat pump to extract warmth from the earth. But unlike other systems, Dandelion is integrated with what would usually be considered add-ons.

It’s also made with lightweight aluminum materials. This lighter, more durable and easier-to-install system is less expensive than a standard geothermal system. It’s more efficient than traditional gas or oil heating systems, and its advanced monitoring makes it smart-home technology that’s unmatched in its field. Home HVAC systems rarely provide any kind of intelligence, not to mention intelligence of this caliber. 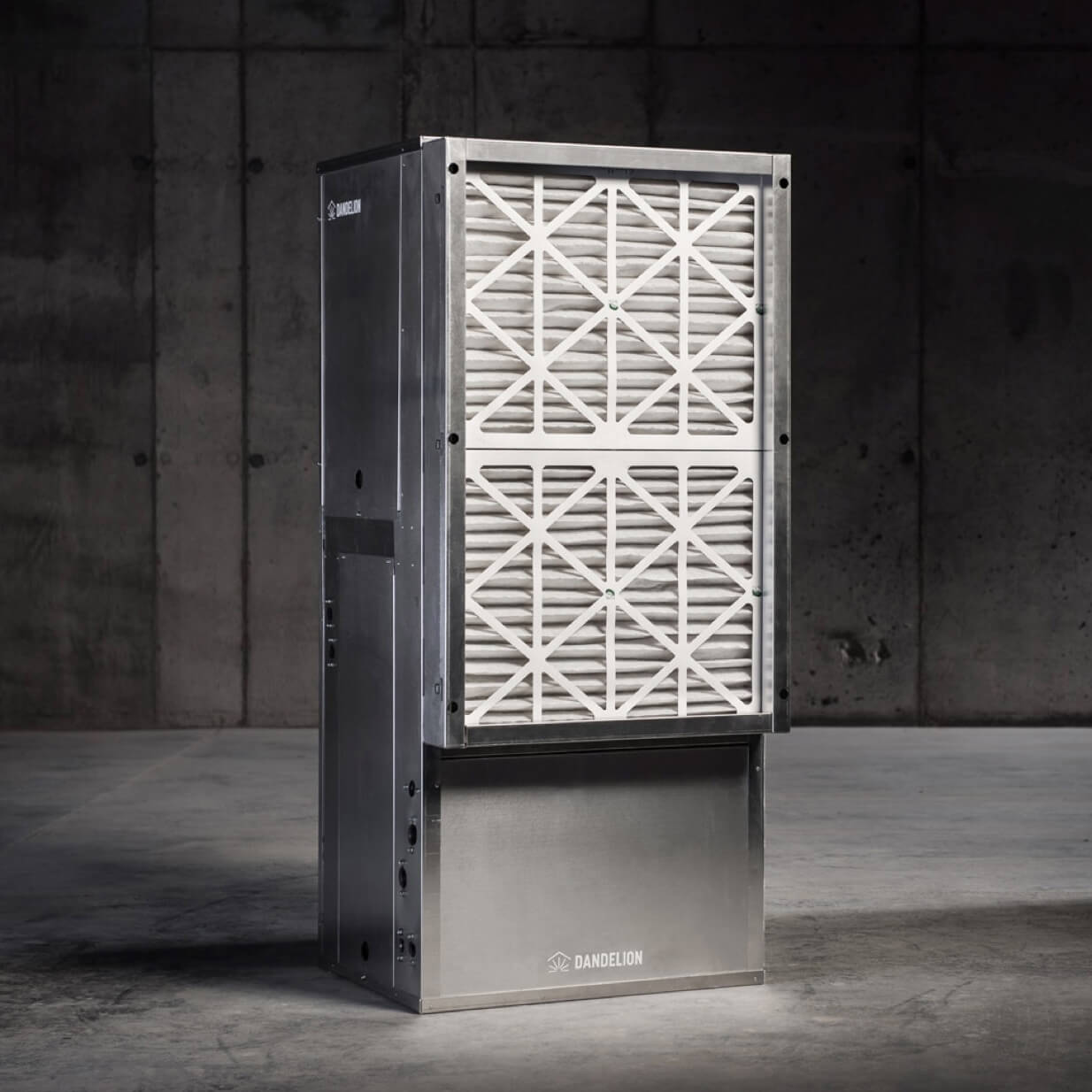 A Monitoring System To Rule Them All

Dandelion’s heat pump is tested at its manufacturing facility to measure baseline performance. Then, it’s tested again after installation to make sure integrity is maintained. The heat pump contains multiple sensors, which check in on the pump on a second-by-second basis throughout the system’s 20-year lifespan. This real-time monitoring ensures any issues are addressed as soon as possible.

Solar Energy + Geothermal Power: A Match Made in Heaven

Solar energy and geothermal heating and cooling completely each other in a “clean energy” kind of way.

If you have solar panels producing your electricity, but you’re still using gas or oil to heat and cool your home, you’re probably not offsetting your carbon footprint as much as you think. While you might be powering up your electronic devices with clean energy, you’re still firing up the local power plant any time you turn up the thermostat. 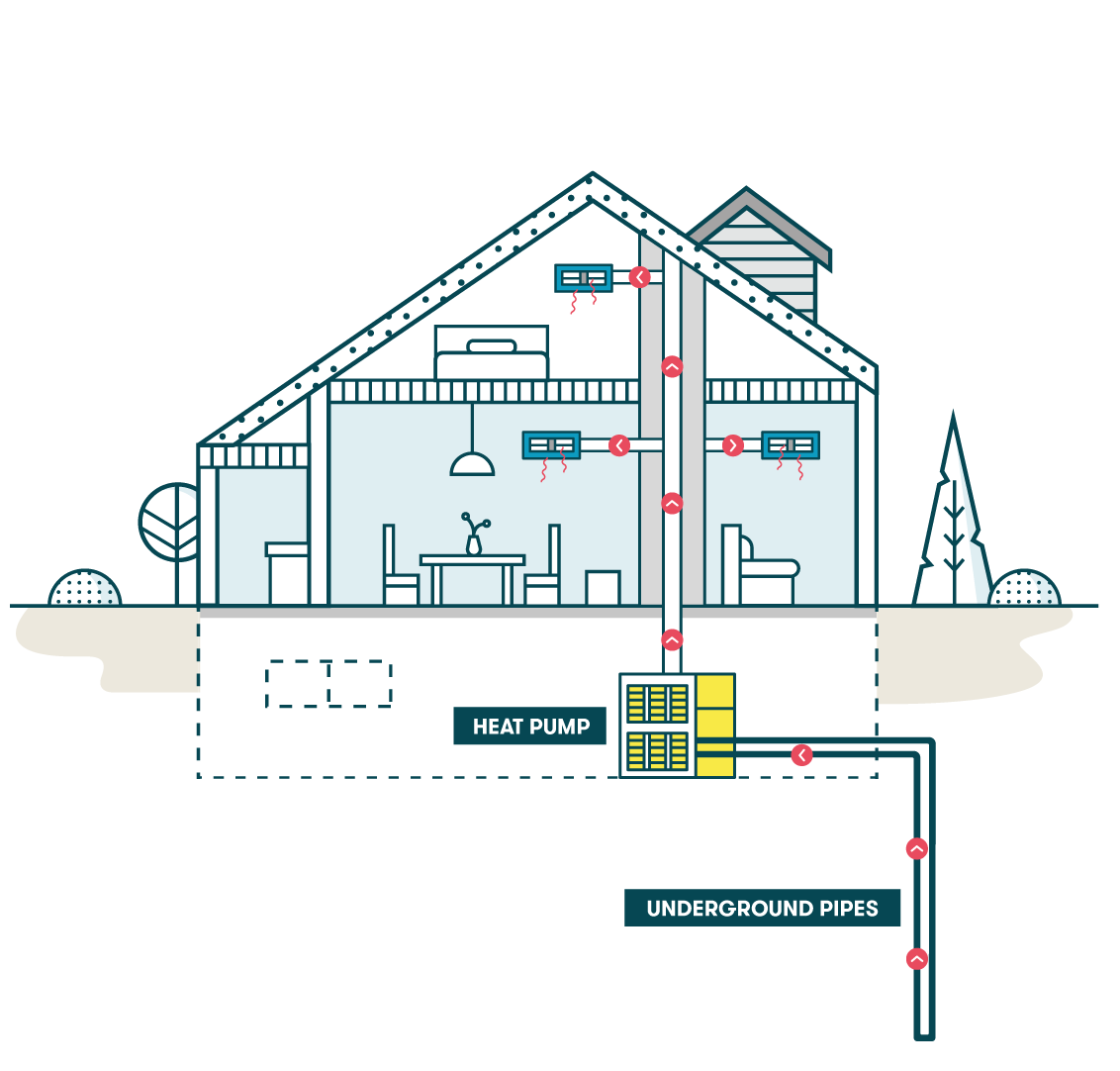 Dandelion Air uses electricity. It eliminates oil or gas bills completely but increases the electricity bill. If you had a geothermal system, but not solar, you would still be getting electricity from the utility company. In this case, coal plants or other dirty sources may still produce electricity. Adding solar takes you completely away from burning fossil fuels.

Dandelion recommends that homeowners get solar to offset additional electricity costs and have 100% clean renewable energy.

Customers also find their homes to be not just more consistently regulated in temperature, but much quieter after the install. No more noisy blower forcing you to turn the TV up to 100. That’s a peaceful bonus. Noise pollution is a real issue, especially at home.

Read more about cost savings and environmental impact on Dandelion’s blog. And check out some customers telling their stories about the stark price differences and how they like the system.

To learn more about geothermal power for your home, visit Dandelion’s online portal.

We’re all environmentalists at Solar.com. That’s why it sometimes comes as a surprise to our customers when we recommend that they trim a tree or...